IS THIS THE PLAINEST SKIRT YOU'VE EVER SEEN?

I know you're going to look at this picture of my new skirt and think "wow! ..... that's dull" but stick with me because there's some interesting stuff going on inside. 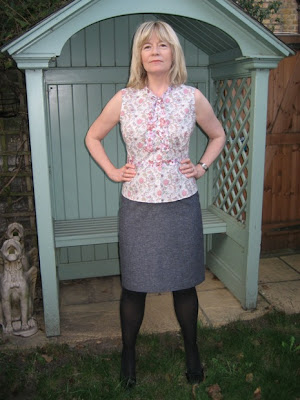 This skirt is made from Simplicity 2564 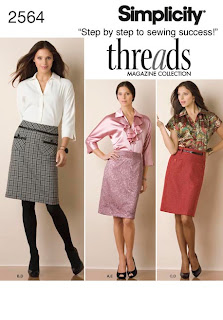 so I could have chosen to add pockets, trims, belt loops etc. but I decided I really needed a very plain skirt - I wanted it to look good with my new top (Simplicity 2501), featured in my last post, but I also wanted to be able to wear it with lots of other things. Sometimes you just have to bite the boring bullet and make a wardrobe workhorse.

It's made from a grey medium-weight denim, so it should be sturdy and can be dressed up or down to be casual or smart. Size 12 fitted straight out of the envelope but to be really perfectionist I made a small swayback adjustment. I made the following changes from the pattern instructions - I used an invisible zipper and I mitred the corner of the left back vent, which looks much neater that just folding it over. Also, I lined the skirt, putting a lace trim on the lining hem. 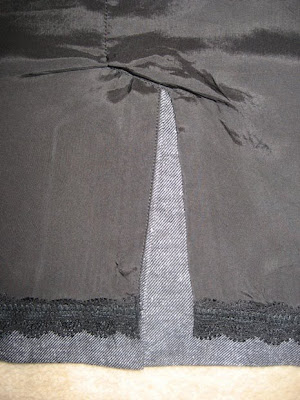 Above is a picture of the inside of the vent and you may be thinking "what's gone wrong there, why is there is a fold above where the vent is secured to the skirt?" But the reason for this is 'lengthwise ease'. When cutting the lining out I referred to my oracle - Connie Long's Easy Guide to Sewing Linings - and what Connie says is "Whenever you connect the lining to the outside vent, lengthwise ease is important to keep the lining from distorting the outer seam". So, as per her instructions, this is how I drafted the lining pattern - 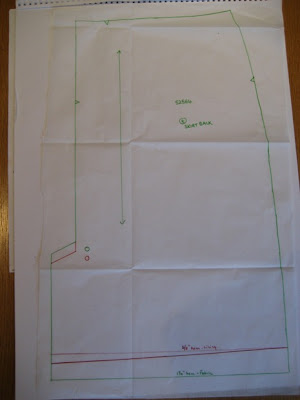 The green line is the cutting line for the outer fabric and the red line is the cutting line for the lining. As you can see, the lining is cut a half inch lower from the pivot point to the hem line at the centre back, blending upwards to the original hemline at the side seam (note that for this pattern I have allowed 1 1/4" for the skirt hem and 5/8" for the lining hem and the lining is 3/4" shorter than the skirt). When sewing the lining to the skirt you match up the pivot points so that the lining hem is raised up and becomes level and a fold forms above the vent. So it looks a bit wonky inside but I think that it does actually work to make the outside look better and doesn't strain or pull the seam when moving, sitting etc.

Incidentally I initially found it a real headache to work out how the lining vent was attached and which side needed to be cut off and where until I looked at Jackets for Real People by Alto, Neall and Palmer. Even though their explanation was for a jacket vent it's the same for a skirt vent and I found their illustrations really easy to understand.

Next time I make this skirt I think I'll go crazy and add some pockets!