My latest make is what I like to call an easy-to-wear dress in an all-year round print fabric (which, by the way, is a silk twill designed by Phillip Lim).


In the coming months I am planning on wearing it with boots and a cardi but I also have visions of throwing it on with some shiny gold sandals when summer finally returns.

How this dress came about is interesting. I didn't feel like fitting a new pattern so thought I would rummage through my very large box of patterns that I have made previously to see if something caught my eye to make again. As I went through them I was saying "No, not that one, not that one, never that one ....... oh, hang on a minute, what was that?" I backtracked to take another look at this pattern 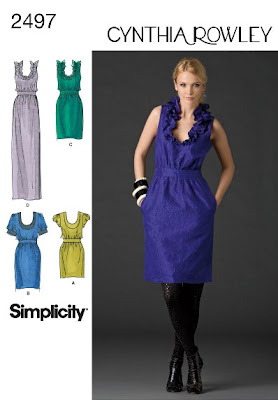 I made the dress with the ruffle on it almost two years ago (blogged about here). I do love the dress but I didn't feel the need for another one, especially as it is rather low cut (even after I raised the neckline!). There is a limit to the number of places I go to that require a ruffley low cut dress. However, until last week, I had completely overlooked the fact that there is another view for this dress (shown in the bottom row of the line drawings on the pattern envelope). Instead of the ruffle it has a faced neckband, which means the neckline is at a higher, more respectable level. I decided that this version, but without the puffy sleeves, would be exactly right for my nice designer print.

When it was almost done I got the feeling that the dress needed just a little something extra to give it a bit of punch and a more 'finished' look.
﻿

﻿I was thinking of doing some topstitching in heavy black thread around the neckband when I remembered that I had some sew-on jewels in my stash. I purchased these a long time ago for nothing in particular but I felt that one day they would be 'the perfect thing' for something.


﻿﻿So, my tip of the week is this. Don't forget to take a close look at your pattern stash - sometimes you might be surprised to see that a pattern you had dismissed has got another view sitting, unassumingly, in the corner just waiting for you to notice it and turn it into a dress you really like!
Posted by Eugenia at 07:35