Spending time with people who sew!

Have you ever started to talk about your favourite subject, yes, I mean sewing, only to see your companion's eyes glaze over? It happens to me a lot. But not last Wednesday. Why? Lucky, lucky me I spent the afternoon with these lovely people
﻿
﻿﻿
﻿Elizabeth, from SEWN was visiting London from New York (I was very happy to see her again - we first met last summer in her home city). Also in the party were Helen from Sew Stylish, Catherine Daze and Claire from Sew, Incidentally. I was so pleased that Elizabeth's trip was the catalyst that enabled me to get together with these UK sewing-blogging ladies whose work I have admired from afar.

Naturally all of us wore something that we hade made. Helen's stunning colourful top, Catherine's amazing plaid dress, Claire's fabulous Sorbetto top and Elizabeth's super-cool linen pants perfectly showcased their wonderful sewing skills. Oh, and the skirt I am wearing was made by, yes, me! 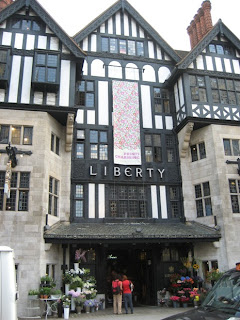 We shopped at Liberty then trawled the fabric stores of Berwick Street. We laughed at shiny, sparkly theatrical polyesters and swooned over wildly expensive embellished silks. Have you ever cut into a piece of fabric costing £150 (USD 245) per metre? Phew!

We finally settled ourselves into one of Soho's characterful public houses for a well-earned drink, where we were joined by the lovely Karen, from Did You Make That? I am so sorry that I missed meeting Melissa, from Fehr Trade who joined the party just after I had to leave.

There is nothing like spending some time with like-minded people who sew to inspire you and reinforce your love of sewing. Do it whenever you can - I heartily recommend it!
Posted by Eugenia at 05:44 28 comments:

I used the fabric of shame!

Those of you that live in the USA are currently gearing yourself up for the ninth season of Project Runway, which starts this week. So you might be a little surprised to hear that here in the UK transmission stopped at season 6 and there are no plans to show seasons 7 or 8. However, to my delight, I recently managed to get my hands on a dvd of season 8.

Whilst watching episode one, I was thrilled to see that one of the designers picked out this fabric 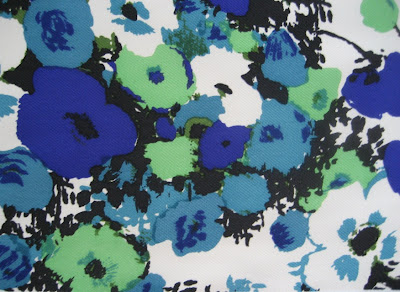 I purchased some of this very same silk fabric at Mood, back in August of 2009 (blogged about here), and I used it to make a dress shortly after. How excited I was! Could it be that this fabric was going to be used to make the winning creation? Would Heidi, Nina and Michael love it?

No, of course not. The designer was McKell Maddox and her dress was the losing dress. McKell was out. 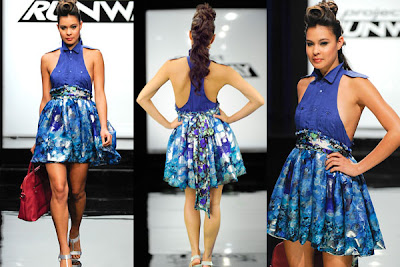 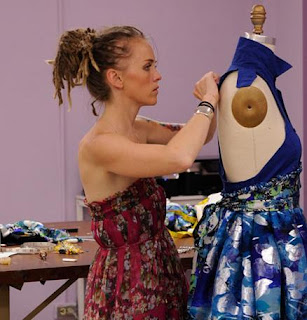 I am trying not to feel too mortified because she only used this fabric for a part of the dress (the waistband and sash). Also I think that it was the design of the dress (Michael hated the "side cleavage") and the styling ("a train wreck"), not this particular choice of fabric, that the judges took issue with.

When I used the fabric I didn't mix it with other fabrics. Here's the dress I made (I originally blogged about it here.)

I actually love this dress - it is now over a year and a half old and I still wear it quite often. I stand by the fabric, it handles beautifully and I really love the colours and print. I have some left and I do plan on using it - with careful thought!

With McKell's dress I think it's a case of good fabric being made bad, although under that kind of pressure I think she can be forgiven! In fact, I think that one of the most difficult things about making your own clothes is working out what fabric is going to work with what style, especially when used in combination with other fabrics. I have certainly made quite a few bad choices and I believe that even the most experienced of sewists have sometimes been surprised to find that their style judgements haven't quite worked out as they expected.

Have you ever taken a fabulous fabric and turned it into something disastrous? Do tell .......
Posted by Eugenia at 05:28 32 comments:

Yes, it's that dress again and yay or nay for hand stitching?

No apologies, but I have made yet another version of Simplicity 3503. I'm calling this latest version (number five) my 'English Summer Garden Dress' - just right for afternoon tea, the village fete and, of course, garden parties, where I can blend into the rose bushes!


When the fabric, which is a rayon lycra mix, arrived from Gorgeous Fabrics I loved it so much that I didn't want to take any risks with it. At the best of times knit fabrics can behave in quite wilful and unpredictable ways, so having a pattern you've made before really does increase your chances of finishing up with a dress that you love.

The pattern gives you a lot of different options.
﻿
﻿The one I made is in the bottom right hand corner (but I didn't use a contrasting fabric for the midriff or neck band).

I do love the sleeves
﻿
﻿They give coverage but because they are loose they are not too hot on warm days.

﻿﻿I don't like to do lots of hand stitching but I do enjoy it sometimes - I find it rather relaxing to be stitching away and listening to the radio and I like the exactness of it. How about you? Do you love it? Do you only do it if you absolutely have to? Or have you worked out all sorts of ingenious ways so that you can stitch absolutely everything by machine?