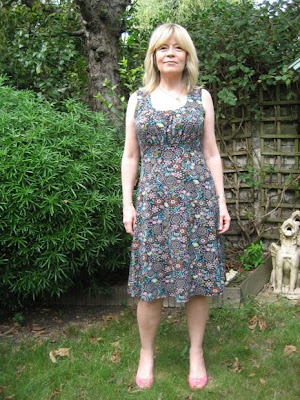 Here's the back view, which has a kind of blouson effect - nice design feature or hunchback effect - I'm not entirely sure? 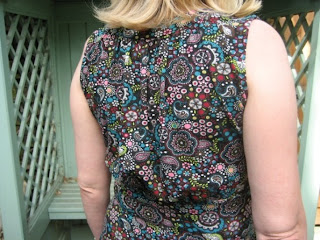 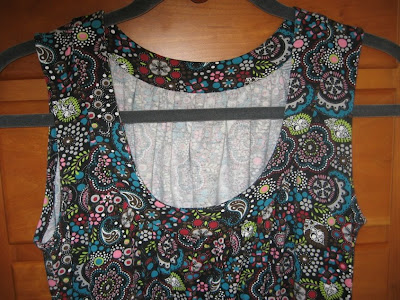 But I didn't follow the pattern instructions for the armholes - they tell you to just fold in the seam allowance and sew it down. I tried this out on my muslin and didn't like it - it came out too wonky looking for my taste. So I cut separate strips of fabric as armbands - sewing them right sides together with the armholes of the dress then turning them inside, folding the edges in and sewing them down. I think the result is much neater - 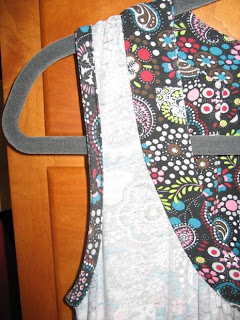 Apart from that I pretty much followed the pattern instructions.

Now that I'm done I like the dress a lot better than I thought I would but I think that my initial concerns about whether this dress would look any good were based on my muslin. I cut the muslin as a size 8 through the neck and shoulders (I have a narrow back and shoulders) then graded out to a size 12. Size 12 is actually one size smaller than Vogue, according to their measurements, would have had me make, but it was still pretty BIG. I didn't want to mess around too much with this - after all it was supposed to be "Very Easy, Very Vogue" so I just pinned it in all down the sides until it felt like it fitted then cut down the sides of my traced off pattern tissue to match. Lastly I added about an inch in length to the bodice front (curving under the bust in a kind of unscientific freehand way) so that the seam that attached it to the skirt came just below my bust rather than half way up- a kind of half fba - adding length but not width. Interestingly when I compared my new pattern tissue to the original one it turned out that I should have just cut a size 8 all the way down which is pretty crazy because according to Vogue measurements that would make my bust 31.5 inches!!!!! You can take it from me that my bust doesn't measure 31.5 inches. Why oh why do they have to add so much ease to a knit dress?

Now that I've had that little grumble my general view on this pattern is that it does make a nice looking dress that works well for both daytime and evening, depending on the fabric you choose. Now that I've got the fitting sorted out it wouldn't take too long to make another - the instructions only take a page and a quarter with just 16 steps. I can also report that my DH really loves this dress - it seems to have some man-appeal - so I guess that makes it a bit of a winner and well worth making!
Posted by Eugenia at 09:07