Finished at last - the 'Uptown/Downtown' dress

I mentioned in my last post that I was working on the HotPatterns ‘Uptown Downtown Knit Dress’. 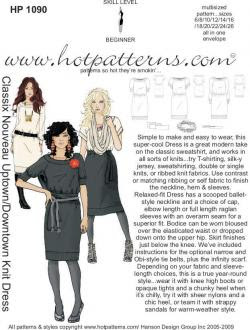 As that was a couple of weeks ago some of you might have been wondering where it is – how long can a 'Beginner' knit dress take? Actually my lack of posting has more to do with extremely exasperating difficulties with our internet connections than anything else but hopefully, after seeking professional assistance, those problems have been resolved. That said, the Uptown Downtown dress also presented me with some frustrations. But, as you have been so patient with me, I can finally offer you not one but two versions of this dress.

This is the first one I made 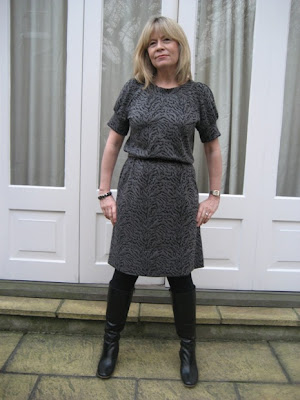 I used an inexpensive novelty double knit, called ‘Requiem Tiger’ purchased from Vogue Fabrics (how I love those people!). Fabric limitations meant I had to make what is called on the pattern ‘elbow length’ sleeves but they are actually more like what I would call short sleeves. I also didn’t make the hem band – I just cut the skirt to the length I wanted it then turned up a hem. It’s a fun, casual dress, although the sleeves were a touch pouffier than I would have liked. All in all, though, I was pretty happy with this one so decided to plunge straight into another one.

It was the second version that had me climbing the walls! This is it 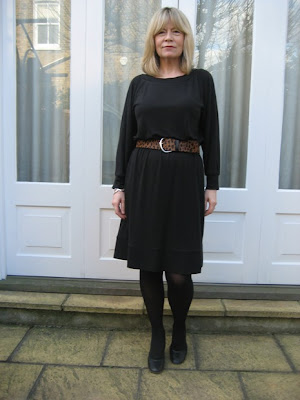 The fabric is, I think, some kind of cotton/spandex knit. I can’t remember where I purchased it but it’s been in my stash for a while. Anyway, whatever it is, it behaved very differently from the double knit used in my first version.

As soon as I attached the neckband I was unhappy – this time the neckline was so loose that it was actually dropping off my shoulders, quite unlike my first version. I tried to tell myself that I liked it that way but the truth was I didn’t and then my DH stepped in and said that it was no good, it would have to be redone. So, I had to rip out all the serger stitching and cut a new neck band. I cut this one a full two inches shorter which turned out to be about right – despite the time and effort spent I was glad that I reworked it.

My second problem came when attaching the sleeve bands. I had no difficulty with the short sleeves but with the long sleeve version the smaller cuff has to be stretched out an awful lot to attach it to the sleeve fabric. Because of my neckband trouble I decided that I was going to use my sewing machine, not my serger, to attach the cuffs so that I could rip out the stitches more easily if I wasn’t happy. It was just as well that I did because after two failed attempts I had to re-cut the cuffs about ¾” larger in order to get them on properly. Although my fabric was stretchy, it just didn’t stretch enough to make this easy.

Lastly, a word about the hem band. As many other people who have made this pattern have pointed out, if you want the hem band to gather the skirt in, like the picture on the pattern instructions, you will have to cut the hem band smaller than the pattern allows. For my version I had to cut a couple of inches off the width of the band just to get it so that the skirt was straight, you would need to cut quite a lot out of it to get a gathered effect.

So, if you are planning on making this dress I think you do need to be aware that results are going to vary depending on how soft and stretchy your fabric is and it’s not very easy to judge exactly how it’s going to turn out. In general I really like the designs that HotPatterns offers and the video tutorials on their site are wonderful. Despite the challenges this particular pattern posed I am not unhappy with the final results and, now that I have a better feel of how different fabrics would behave with this pattern, I might make it again but definitely not right now. Enough already with Uptown Downtown dresses!