I’ve made myself yet another top from Jalie 2806, the wonderful top pattern that I like so much. 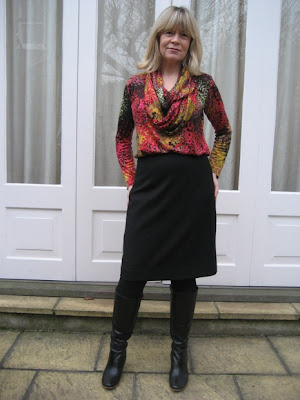 Now those of you that are familiar with this pattern must be a little puzzled because the pattern is for a variety of scoop neck tops, not a top with a draped neckline. But I’m going to reveal my secret 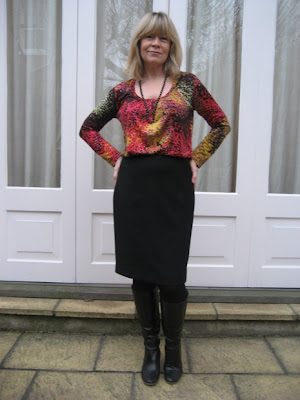 You see the top does have a scoop neck but in the first picture I am wearing it with a neck ring scarf, that I made from the leftover fabric. That way this basic top gets two different looks. Pretty neat, eh?

I found the instructions for making the neck ring scarf in the October issue of the Vogue/McCalls/Butterick pattern magazine – in the UK the magazine is called Sew Today but in the USA it’s still called Vogue Patterns. The neck ring is very easy to make. Basically you take a piece of leftover fabric (mine measured 60” wide by about 20” so is long enough to go round my neck twice), fold it in half lengthwise and sew the long sides right sides together but leave about 5” open at either end. Turn it right sides out. Then, also right sides together, you sew the short ends together (this is made possible because you have left the ends of the long sides open). Then hand sew the opening. Done!

Back to the top. This is actually the fourth time I have made this pattern but, guess what, this time I managed to screw up sewing the neck band on. It turned out to be horribly uneven, totally unacceptable! So I had to unpick all the serger stitching (yuk!) and cut another neck band. Fortunately the fabric of the top itself wasn’t too mangled. By taking a lot of care my second attempt at getting the band on was (almost) perfect. Which just goes to show – I should never get too complacent – it doesn’t matter how many times I’ve done something, it’s still possible to make a mess of it! Do you identify with that kind of mindset – “Oh this won’t take a second, I can do this in my sleep ………. whoops, what happened there?”

I haven’t been doing much sewing in the last few weeks, Christmas preparations have been top of the agenda, but I do have plans to get at least some sewing done before Santa arrives. So, more soon …..