I have finally completed my Burda magazine jacket. Here’s a full length picture 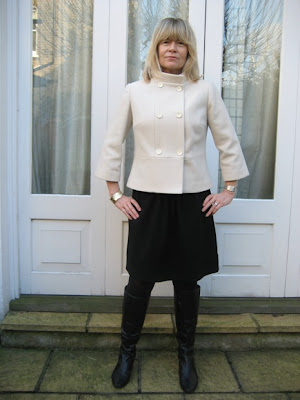 Here’s a close up, so you can get a better look at the construction details 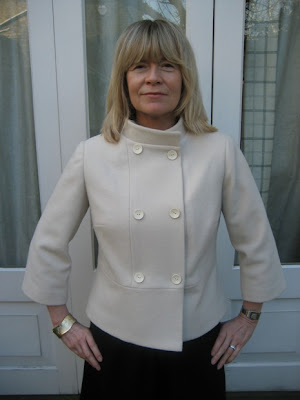 And here’s a picture on a hanger so you can see the crazy lining – it’s bold but I thought that it would be fun! 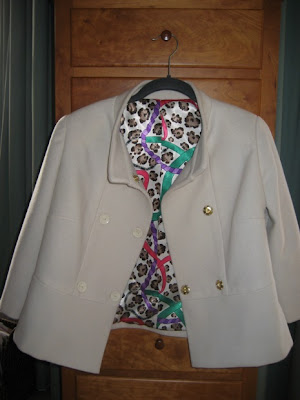 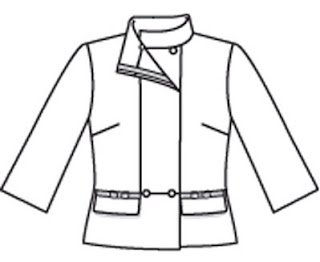 As you can see, I omitted the front flaps. Because the wool fabric I used is quite thick, I decided that these flaps (which actually serve no real purpose because there are no pockets there) would just add more bulk than I wanted to have around my waist.

Fitting this jacket wasn’t a problem. I made my usual FBA but that was the only alteration I had to make. I did, however, reduce the sleeve ease. When I made my muslin I noticed that there seemed to be a lot more ease than I felt I could neatly get into the armhole, so I altered the pattern to take out about ¾” ease from each of the sleeves. I did this the way that Sandra Betzina recommends in her book Power Sewing. You draw three vertical lines from the top of the sleeve cap to the hem of the sleeve (one in the centre and two about 1½” either side). Then cut down these lines leaving a small hinge at the hem edge. Then overlap the pattern at the sleeve cap at each of the three cut lines (losing ¼” per cut) and tape it all down. It worked very well – I had no trouble getting the sleeves in smoothly.

I had a bit of a crisis over the fastenings. At first I decided to use no buttons, just five covered snap fasteners, like Burda used on their other version of this jacket (pattern no.119). Then I decided not to cover them because I decided that the gold snaps would add something. But once I’d sewn them on I didn’t like how you could see the outline of them on the outside and I felt that when done up the jacket looked too plain and kind of ‘so so’. Finally, I sewed on six decorative buttons and, at last, I was happy!

All in all, as jackets go, I don’t think that this was a very complicated one to make. The Burda instructions were, as always, pretty skimpy but, with the exception of their collar joining method (where I did my own thing!), I managed to follow most of what they were saying.

I’m hoping I’ll get a lot of wear out of this jacket. It’s nice and warm (I’ve underlined it as well as lined it) and I think that the shapely style means that it can be worn with dresses as well as more casually with a pair of jeans.

So, jacket done! Next up is yet another dress………