My Liberty print fabric is now a shirt!

My rather expensive Liberty print fabric, that I bought last month, has now been turned into a shirt - 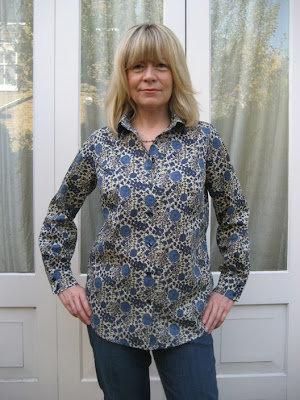 Perhaps, at this point, I should reveal a little bit of my personal shirt history. I haven’t owned a long sleeve shirt since, probably, the late 1980’s – in those days shirts were much looser and, indeed, I was much smaller and, whilst the fit was never perfect, I could buy one RTW that was at least passable. Throughout the 90’s fashion got more fitted and my figure got curvier and I discovered that narrow shoulders and a full bust meant that if a shirt fitted my shoulders I couldn’t do it up and if I could do it up my arm movement was restricted by overhanging shoulders. I shudder to recall the many depressing changing room scenes where desperate sales assistants have attempted to button me into some hideously unflattering garment. Since taking up sewing last year I have been determined to make myself a well fitting classic shirt – the sort of thing that all the style gurus say is a must for any wardrobe.

I chose this pattern 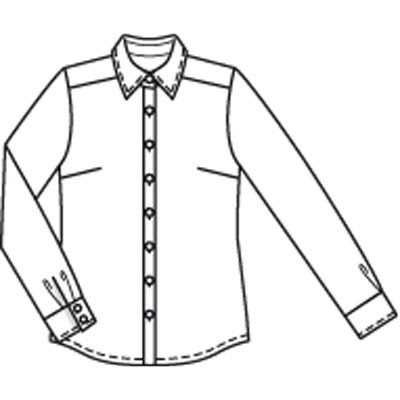 which is pattern number 105 from the September 2009 issue of Burda Magazine. As I mentioned in my previous post, I liked that it was “slightly-fitted” and had a double-layered shoulder yoke, a narrow collar and curved hem. It took me two muslins to get something that I was happy with. I started by tracing the size 38 and making a 1” FBA but eventually decided that this was too fitted from the armholes down (I wanted a ‘relaxed’ fit) and was too big around the shoulders. So I started again with a size 36 for the neck and shoulders, grading out to a size 40 for the body and made a small FBA. I also made a petite adjustment across the front, back and sleeves just above the armhole notches, shortened the sleeves and cut the cuffs at a size 36. See what I mean? That’s a lot of fitting adjustments isn’t it? Next time I might be able to fine tune the fit a bit more but, on the whole, I’m pretty ecstatic that I’ve got a shirt that doesn’t gape at the bust and allows me to actually move my arms.

When it came to making it up I have to confess that the stitch ripper was constantly at my side with this one. I can’t blame Burda because their instructions were fine as far as Burda magazine goes. No, it was me not paying attention to what I was doing – Burda give you a nice way of sewing the outer and inner yokes on to the back and front pieces so that everything is neatly enclosed but I managed to sew the outer yoke on inside out! Or, it was me changing my mind – at first I chose to do the topstitching using a dark, navy blue topstitching thread but after doing the first line of topstitching on the back yoke I decided that it would be too overpowering so I ripped that out and switched to a regular thread in a mid-blue that disappears and lets the pattern do the talking.

Here’s a close-up picture of the neat little collar and, if you look closely you can, hopefully, just make out the lines of the yoke and the topstitching. 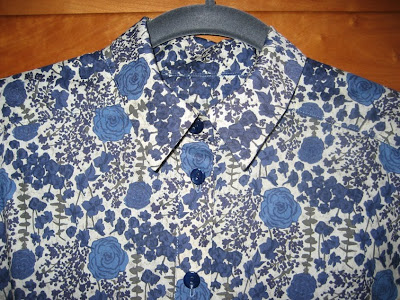 The funny thing is that, once I was done, although I really liked it as a garment on the hanger, when I put it on me I wasn’t so sure that this style suited me – I felt that it just wasn’t me! However, Mr Fabulous told me I was wrong, so I wore it out shopping for the day and, you know what, by the end of the day I decided that I really did like it on me after all. So, here’s another, full length, picture of me in my new smart-casual wardrobe basic. 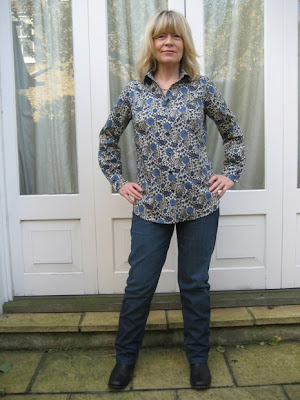 Looks like I’ve found my TNT shirt pattern – thanks Burda!