Last week I was in a frenzy of indecision - so many fabric and pattern possibilities were whirring around my brain that I just didn’t know what to make next. At times like this I think that you can’t go too far wrong if you turn to the classics. And you can’t get much more classic than a Coco Chanel inspired little black dress trimmed with white.


"I said that black has it all. White too. Their beauty is absolute. It is the perfect harmony.” Coco Chanel.

The pattern I used was Butterick 5602


I made the version drawn in pink but without the bow. I was aiming for a comfortable shift dress, as Coco also said: “Luxury must be comfortable, otherwise it is not luxury”.

The fabric I used is 100% wool crepe purchased from Linton Tweeds who are based in Carlisle but also have an online store. If you are going to make a ‘Chanel’ dress there is nowhere better to turn to than Linton.
﻿﻿

﻿﻿They have been supplying fabric to Chanel since Coco herself was in residence at her Paris Salon in the Rue Cambon. To this day Linton still count the house of Chanel as one of their most prestigious clients – along with Oscar de la Renta, Balenciaga, Michael Kors, Lanvin and Caroline Herrera. Oh, and little old me, Eugenia! They supply a wonderful range of tweeds and fancy fabrics as well as a top quality wool crepe in a variety of colours.

So, with a sewing machine, a few hours work and some wool crepe anyone can have a made to measure ‘Chanel’ dress!
Posted by Eugenia at 07:33 120 comments:

Throughout the last winter I harboured a hankering for a cape but I never got around to making one. This year I decided to jump right in and make one before those nagging suspicions that a cape would look silly and be totally impractical stopped me.
﻿ ﻿
Right now there seem to be quite a few patterns for capes in the current collections but, as it happens, I used a vintage pattern 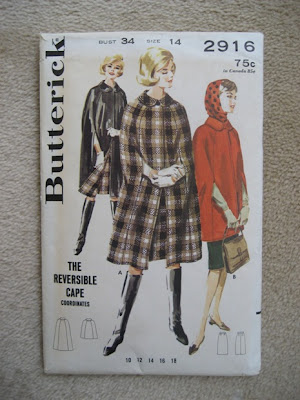 What especially attracted me to this pattern is that it's reversible - two capes for the effort of one!
﻿
﻿Although a cape doesn't really have to fit very closely anywhere I did go to the trouble of making a muslin to get some idea of how this was going to look on me. I'm glad that I did because it made me realise that a long version was going to swamp me and that to look more modern it needed to be quite a bit shorter than the shortest version of this pattern. I also discovered that if the arm slits were longer it would allow a bit more arm movement. I should, perhaps, also mention that at this point my husband looked pretty dubious about the whole cape prospect, muttering that he didn't want to put me off something that I was clearly hell bent on making but he didn't have high hopes for the finished garment.

I used 100% wool in a dark grey for one side and pale grey for the other. Because I felt it needed a little glamour and cosiness I decided to experiment and make the collar in a white faux fur.
﻿﻿
﻿﻿Also, I used a metallic silver thread for the topstitching around the front, the hem and the pocket slits. The whole thing was super-easy to make. It only needed two buttonholes at the top, one on either side. These are fastened together by sewing two buttons together with a thread link so it can be buttoned up whichever way round I am wearing it - 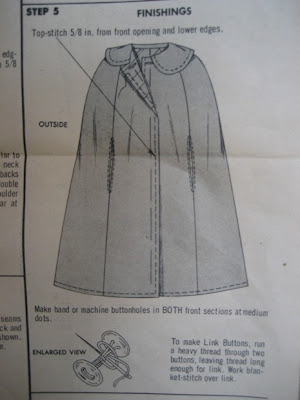 I went through the construction process with mixed feelings - Fear and Hope. So, what's my final verdict on the cape? Well, I do like the way it turned out. I can also tell you that when my husband saw it finished he looked quite startled and told me that it looked a million times better than he had feared: in fact he really likes it. Since making it I have worn it twice and it is perfect for just throwing on when going out for dinner or to visit friends. I wouldn't, however, choose to wear it for a day of shopping because you can't carry a bag over your shoulder: you have to clasp it in your hand, which is a little restricting. I doubt if I will make another cape but I'm really happy that I have this one and have, finally, got the cape craving out of my system!

What about you - is a cape a garment that you would ever consider wearing, do you like the look, hate it, or does the sheer impracticality of a cape rule it out for you? I’d love to know ……
Posted by Eugenia at 05:23 38 comments: