I've made friends with my serger!

I have something humiliating to admit! Although I have owned my serger for some years, we’ve never really got on. It’s a Janome 134D and I can’t fault it. No, the blame must lie at my door. Instead of rolling up my sleeves and spending some quality time practising how to use it properly I just used it to finish seams. I never gave it a chance to show me what it could really do.

But all that’s changed now. I signed on for the Pattern Review online class, Break your Serger Out of the Box, taught by Jennifer Stern, and now that I’ve completed (almost) all of the course worksheets my little Janome and I are the best of friends. 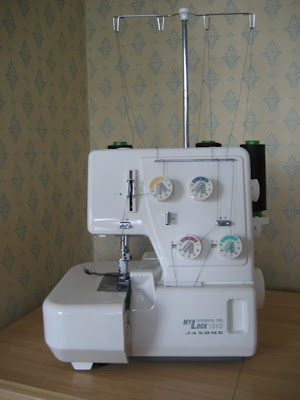 During the course I learnt how to thread it fearlessly, adjust all the tension knobs to cope with different fabrics, alter the differential feed, change the needle plate and disengage the knife. Pretty embarrassing that I couldn’t do all that before, isn’t it?

Once we had the basics sorted out, Jennifer taught us how to do some brilliant and useful things with a serger. Here’s a picture of just three of the many samples I churned out. 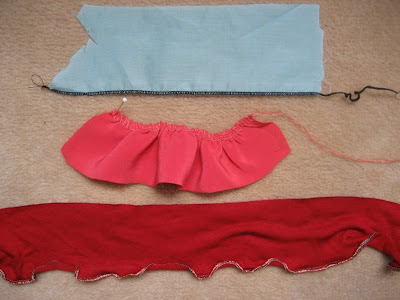 The top one is a really neat rolled hem on a fine cotton lawn fabric – I have used black thread so it shows up but, of course, I could have used a matching thread or even a nice shiny decorative thread.

The middle sample shows how you can use a serger to make gathers – this is a great way of gathering fabric and neatening the edges at the same time.

The bottom one shows a lettuce hem on a knit fabric – here I used a combination of black and gold threads.

I am already benefiting from my new found knowledge because I am currently working on this pattern, Simplicity 2599 - 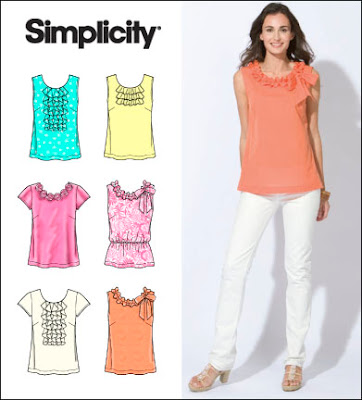 I’m making the one with the three ruffles below the neckline (the top right drawing) and the sample of the gathering in my photo above is a mini practice run for the ruffles – I’ve used the coral coloured silk that I’m making the top in.

So, how about you - is your serger friend or foe? Have you been using your serger for a whole range of stitches or are you a little wary of it? Do its knobs and knives thrill you or terrify you?

Fortunately I recovered from my mishap with this dress (confessed to in my last post) pretty quickly and now, of course, I’m telling myself that I really do love the tab and buttons. Isn’t it funny how we Sewists can so quickly adapt and think positively? A ‘foolish mistake’ can become a ‘design decision’ and so we find ourselves with a dress we love.

Anyway, put some sunglasses on, because here it is 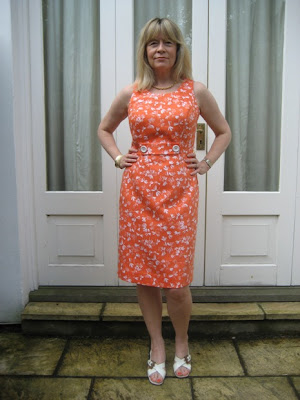 That orange is pretty dazzling isn’t it? In the summertime I’m a sucker for bright colours – orange, yellow, throw in a bit of hot pink and I’m happy!

The fabric is a cotton pique that I purchased from Elliott Berman in New York and I think it’s just right for this style – it’s soft but not too thin, it has some body but isn’t too stiff. Normally I’m a bit of a lining fiend but, as the pattern didn’t call for a lining, and I felt this fabric would be good on its own, I have made it unlined.

The pattern is Simplicity 2648 and the instructions are interesting – I think they’re either genius or annoying, depending on what you want. It’s an ‘Amazing Fit’ pattern so they give you loads of helpful instructions on how to get the fit just right but in order to do this they ask you to baste the whole dress together, make your adjustments, then TAKE IT APART and sew it together again DIFFERENTLY. What I mean by this is that you baste the front bodice and front skirt together then you baste the back bodice and back skirt together and then baste front to back (so it’s easy to fit down the sides). Then you take it apart and sew it together the more usual way – i.e. sew the bodice, then sew the skirt, then join the two together. It’s great if you need to be guided through the fitting process.

Personally, I didn’t do it that way. I bought the pattern because it has separate pattern pieces for A, B, C or D, cups (always a big selling point for me!) and, of course I really liked the style. I like the close-fitting princess seam bodice and I like that the skirt front has two vertical seams with no darts. I did the fitting by making a muslin. I am such a weird shape that I usually have to make all sorts of adjustments that wouldn’t be so easy to make later, once the nice fabric was cut. However, as long as you are prepared to sort out which part of the instructions you want to follow and which you want to ignore, then I really recommend this pattern.

Before I go, here is a close-up of that button tab that I’ve grown to love so much

But next time I make this pattern I’m going for the version with the belt because I think I’m going to love that too. Hey, I’m easy to please!

Oh, I could kick myself!

Note to Self: When making a garment, please READ THE INSTRUCTIONS. You may think you know how to do it but a little glance at the instructions as you go along really will save upsets. Yes, like that nasty moment we had yesterday! 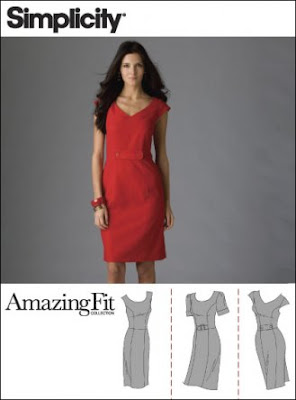 I decided to make the sleeveless version with the round neck (like the drawing on the bottom left) but with the little fake belt with the buckle at the front (like the drawing in the middle). Having altered my pattern for an ‘Amazing Fit’ and cut out my fabric I was pretty excited and all set to go. I sewed the bodice front to the side fronts, made the darts in the bodice back, sewed the back to the front at the shoulders and side seams, checked the fit – great, and then serged all seams. Then I noticed some pieces sitting on the table, yep, the belt pieces!

Now any reasonably experienced sewist will probably know that sewing the belt pieces to the bodice front is the FIRST thing I should have done, before sewing the front to the side fronts. Actually, I did know this myself because I had, at some point in the last week or two, read the instructions and, thank you Simplicity, they couldn’t have been clearer. It’s just that I never bothered to look at them again when it came to actually sewing the thing and I FORGOT the belt pieces.

I hate to unpick a serged seam but I would have done it if it hadn’t been for the fact that my cotton pique fabric, lovely as it is, ravels a lot and, because it was a curved princess seam, I had serged it right next to the seam stitching. I feared that an attempt to take it apart would end in disaster.

So, alas, no little belt with a nice buckle. I really wanted that little belt. Instead it’s going to have to be the tab with the two buttons (like in the main photo on the pattern). Fortunately sewing and attaching that tab is the last thing you have to do. So, now I’m off to buy some buttons!

In the meantime, have you ever forgotten a crucial sewing step – please tell me that I’m not the only one?!
Posted by Eugenia at 04:45 23 comments: 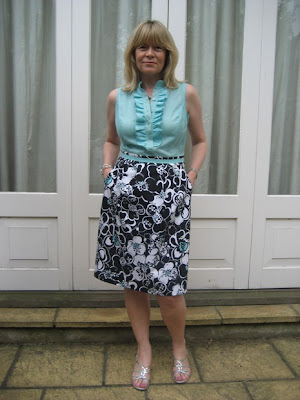 This dress started out with a piece of fabric at Metro Textiles (in New York), seized upon during my recent shopping trip there with Carolyn, Elizabeth and Opal (thanks to you all for your valuable input on my choice). There was only just over a yard left but I thought, that’s fine, it will make a very nice skirt and, at $5.00 for such a good quality piece of stretch cotton, it’s a bargain.

Later, (in New York Elegant Fabrics) I happened to chance upon a piece of cotton lawn that perfectly matched the aqua/mint shade in the print. So I thought, great, that will make a nice little blouse to go with the skirt. Next I found myself in M & J Trimmings and chanced upon some grosgrain ribbon that was exactly the same colour. And that’s when it came to me. Forget this separate skirt and blouse idea - why not use the Simplicity pattern I had just used for my last dress to combine both fabrics into a shirtwaist dress?

I have to say that when I got back to London my heart did sink a little at the prospect of making another version of this dress because (as I moaned in my last post) there is a lot of work with this pattern. However, my enthusiasm for the project overcame my reluctance. This time I decided that I wouldn’t have the tie belt but instead I sewed grosgrain ribbon onto the middle of the waistband before attaching it to the dress. I also decided to add the front ruffles that are one of the ‘designer additions’ included in the pattern.

Ah, yes, the ruffles. They nearly defeated me. The pattern has you cut four ruffle pieces and you’re supposed to narrow hem each of them, then place them one on top of each other in pairs – two for the left side and two for the right side. Now normally I’m not too bad at narrow hemming but the fabric was very fine and the pieces were small and the curves at the bottom were very curvy! Readers, it was horrible. I tried several times but in the end I just had four sad chewed up little rags – definitely not fit to be sewn down my front! Now, of course, I could have just binned the ruffles and gone without but I WANTED RUFFLES!!

Then it came to me. I cut four more ruffles but this time I sewed them together in pairs with the right sides together then turned them right sides out, pressed them and, voila, beautiful ruffles. So what I have is one double layered ruffle either side, rather than two single layer ruffles either side. Here’s a close up of the bodice – 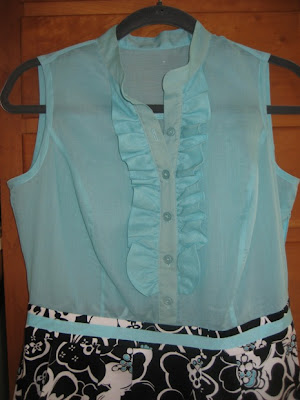 So, there it is. Conceived in New York, fashioned (with a lot of faffing) in London - another dress came into the world and I like it quite a lot.
Posted by Eugenia at 10:21 41 comments: